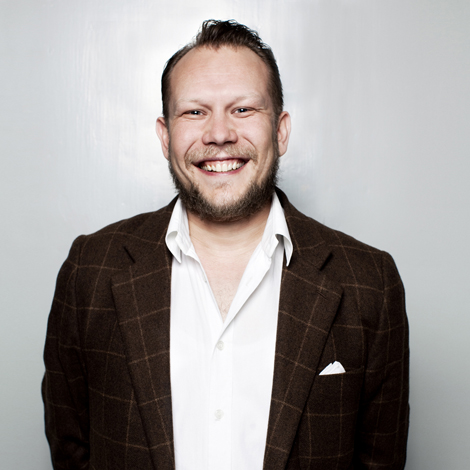 One of the main reasons that the previously shady sex-toy business is now emerging out of the basements up onto the main-streets is one visionary, a Swede that in the french edition of ELLE Magazine is described as ‘ the Philippe Starck of vibrators ‘, this Swede is Ticklers designer Eric Kalén.

In the beginning of his career as an industrial designer Eric Kalén worked at a consultant company mainly designing for leading consumer gods, home appliance and furniture companies. But with the dream of building his own business even as a design student he had been asking himself the same question over and over again: in what area is design not used to compete and create better products? The answer was – sex-toys. Eric founded the company LELO. A name and a brand that soon found its way into the bedside-tables and handbags of women all over the world as well as onto their lips and into the conversation and into the mainstream media.

“I went in to the sextoy market 2003 with the ambition to change the market, to lift the acceptance and remove the taboo. Sex is something basic for us human It´s written in the UN:s declaration of human rights that all humans should have right to their own sexuality.” Eric Kalén says.

In its way it was a revolution, a whole new product segment and lifestyle accessory had been created in just a few years. Eric Kalén had simply designed sex-toys that were beautiful. He had created a clear concept and a brand, the first luxury brand for vibrators. These were products that people were proud and ready to pay a lot of money for and that were mentioned in the same sentence as Prada or Gucci. Eric had succeeded in moving sex-toys from the back-street to the high-street!

When a visionary opens up a road into new territories a lot of people will follow. It didn’t take long before other brands with a similar concept started crowding the premium sex-toy segment. Eric Kalén again started thinking about what new things could be done.

The answer was Tickler.

Eric Kalén describes his vison: “I wanted to do something fun, playful and at the same time affordable toys. Toys that could be enjoyed by the many people. Good design don´t have to cost a fortune.

The design concept behind Tickler is based on my experience and customer feedback over our years in this industry. Our conclusion is that everyone is different and has different demands and requests of what is good for them self and it even differ individual over time.”

To put it simply you can say that Tickler is for sex-toys what H&M is for clothes. Tickler offers the consumer a unique concept with a thought-through product range, great design and function at a price that is affordable for most people. All this with an attitude that is completely free from the normal stereotypes of the sex-toy business.

”Today everybody either make expensive vibrators that they want to be perceived as exclusive, or cheap products where design and quality is of no importance. Instead, I want to put design and concept in focus, and I want to do it with products that don´t consume a big part of our customers monthly salary” Eric Kalén says.

Erik have experience of designing and developing toys since 2003. All his design is based on customer feedback and requests. One of his conclusions is that all people are individual with personal preferences of what kind of vibration they like. There is no perfect product that fits all; that´s one of the main ideas within the Tickler concept. Each line of products have a dynamic range of shapes that emittes different vibration characteristics. With Tickler everybody can feel the pleasure of good quality and design, not only a few.

Education: “I degreed 2000 with a MFA in Industrial Design.”

2000 – 2003: “I´ve worked as a design consultancy at a design company in Stockholm for three years manly designing consumer goods for leading Swedish and international companies.”

Inspiration: “I take very much inspiration from people I meet, travel I really want to make products that people can relate to.”

Role model: “I´ve always tried to walk my own way, to be a good listener and make functional and beautiful things for the many people.  I´ve never really looked much on other designers work.”

Hobby: “I´ve been making jewelry on and off since I was young in all different kind of materials. I´ve always been attracted by beautiful things and I want my products to be like functional jewelry.”